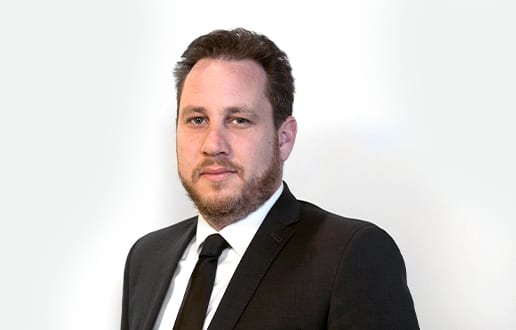 Eyal specializes in complex litigation in various areas of commercial and economic law, particularly the fields of corporate and securities law

He is also known for his strategic and creative counsel in the management of complex class action litigation.

Before joining Barnea, Eyal served as a legal assistant to Justice Esther Hayut of the Supreme Court. He also worked for a number of years at leading law firms in the practice areas of commercial-economic litigation and white-collar crime.

Eyal has been a tutor and a guest lecturer for various courses at Hebrew University, the University of Haifa, and the College of Law and Business in Ramat Gan.

Member of the Israel Bar Association since 2009

The investment fund Plus Ventures and private investor Oren Abeksis claim they invested millions of shekels in a previous incarnation of Lusha and that they were defrauded by the entrepreneurs. Zohar Lande, Eyal Nachshon, Dana Bookstein, and Naama Ben Arosh Moshe are representing the plaintiffs.

Adv. Anat Even Chen and Adv. Eyal Nachshon, Partners at our office, lectured today at the website builders forum on the requirements and obligations of owners, site builders, and site operators given the obligation to access the degrees.

After a lawsuit filed by liquidators of a company that collapsed against the company’s former officers, directors, and independent auditors was dismissed in limine, a new Israeli Supreme Court ruling overturned that decision and allowed the liquidators to move forward with the lawsuit, alleging that lack of oversight was what led to the company’s collapse. The significance of this new ruling is that the “business judgment rule” will no longer be interpreted as providing automatic protection to executives, and they may now be compelled to participate in lengthy legal proceedings to prove their entitlement to legal protection.

See all news of Eyal Nachshon >