Ministry of Energy Publishes Second Bidding Round to “Join the Israel Gas Revolution!”

The Israeli Ministry of Energy published on November 26, 2018, a second call for bids, inviting international energy players to submit offers for the exploration of offshore soil.

In the new bid round, licenses for 19 blocks will be issued in five zones, according to the map below. Each zone comprises up to four exploration licenses. A bidder may bid for more than one of the zones, provided that the total number of licenses granted to such bidder does not exceed eight licenses (i.e. two zones).

According to the Ministry of Energy, the decision to market the blocks in zones is to allow for better correlation between the exploration areas and the subsurface geological structures that potentially contain oil and gas reservoirs. Holding larger interests will allow efficient subsurface evaluation and will increase the attractiveness of the zones to investors.

The zones are located in the southern part of Israel’s economic waters, an area previously licensed in part and which had prior seismic research and limited exploration activity. Existing research indicates the potential for the discovery of hydrocarbons in the bid round area.

The timeline for the submission of the bids is as follows:

Bidders must also meet the prequalification requirements set forth in the Petroleum Regulations (Principles of Operation of Offshore Petroleum Exploration and Production) 5777-2016:

A bidder may prove compliance with the financial capacity criteria in reliance on its controlling shareholder.

Additional requirements are imposed on the bidder’s proposed operator with regard to financial competence and financial robustness. The proposed operator must also have at least five years’ experience in the following areas: offshore petroleum exploration, offshore drilling, offshore development and production of oil and gas fields, HSE activities, and maintenance of a safety and environmental management system for petroleum operations. 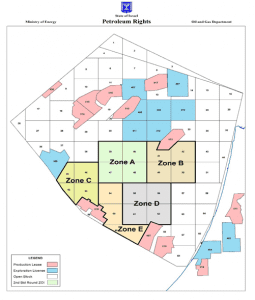